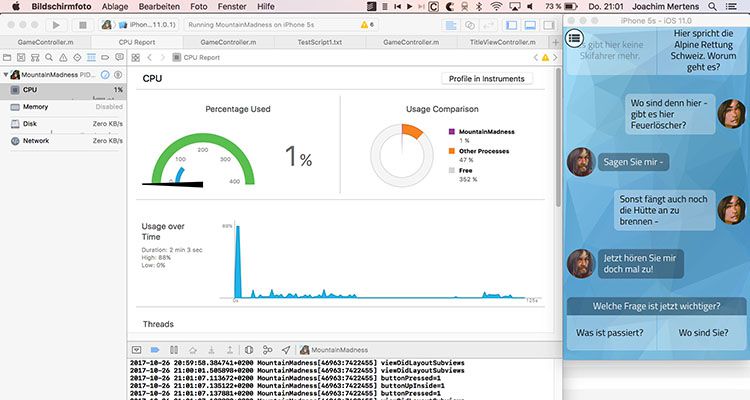 Is game development only for people with a university degree? No: You don’t necessarily need to have studied computer science to be able to program computer games. Joachim Mertens is a game developer at Tiny Tap Gems, the creators of Cold Crash, Hover Disc 3, Simple Painting and other successful apps and games. He knows: Of course, the development of games depends on technical expertise. But what really matters is something completely different.

When the kids are in bed, normal parents take out the candy and the wine. Not so the parents of Joachim Mertens, game developer at Tiny Tap Gems. “At some point in the mid-1980s, my parents gave me a Commodore 64, the most popular personal computer at that time. They had already bought the computer two months before Christmas, and when I was in bed they unpacked everything and typed programs from magazines. They were really into programming!”

Game development at home: Parents program games – in the 80s

Parents who are programming? In the 1980s this was still a rarity. “In retrospect, I also find it very unusual”, says Joachim Mertens,”they even played games: Moon Patrol, to the end!” When the offspring began to play and quickly overtook their parents, the frustration was palpable among the parents.

At the end of the 80s there is no YouTube, no Stack Overflow or Wikipedia. Knowledge comes in books, and you can’t do without manuals. “Of course I bought a book explaining how BASIC works”, says Mertens. BASIC is a programming language, suitable for beginners, for the first steps. Other languages are more suitable for complex software, C++, for example, is one of the languages that have become established worldwide.

“At that time, we were sitting in front of TV sets, one and a half meters in front of such a raygun”, recalls Mertens, recalling the era of cathode ray tube TVs. “At that time, we had to deal with the machine in a completely different way than we do today”, says Mertens, “there are so many tools today that do a lot of work for us, entire development environments such as Unity. But nowadays the projects are much more extensive.”

And: “Today you can even study the development of computer games, game design, computer science. If I started programming today, I would try to find out what is the best development environment for me personally. And watch YouTube tutorials. Books are also cool, but a video tutorial is more catchy, easier, you learn the whole handling.”

“Math helps in the development of computer games.”

Do you really have to be good at math to program games? Or is it possible without using modern development environments that do a lot of work for the programmers? Mertens: “It is indeed the case that there is already quite a lot of math involved. Let’s say you’re programming a homing missile. You know the position of the missile and the position of the target. The rocket must rotate properly and fly properly, you must know the function for it – sinus, cosine, arc tangent… it’s not bad when you can do some math.”

Many developers emphasize the importance of personal endurance, the joy of fiddling. “You have to be willing to grow into it, to learn that. A half an hour of YouTube tutorial is not enough”, explains Joachim Mertens from Tiny Tap Gems.

Depending on the project, the composition of a team changes, as is the case with Tiny Tap Gems. A programmer alone may be able to build the framework, but for a finished game much more is needed: graphics, music, sound effects, just to name a few examples. “For smaller projects, you might even get along with purchased graphics”, says Tiny Tap Gems programmer Joachim Mertens”, “which are now available in the development environment, for example in the Unity Store. But it’s much nicer to work with a colleague, of course.”

Music and graphics are available pre-produced, for example at audiojungle or shutterstock. The costs are manageable and the elements are immediately available. The drawbacks: The contents are not exclusive, everyone can buy them and you’ll have to finde content that matches your game. If the graphic style changes in the middle of it because you bought elements from another supplier, this is a break in the immersion. Immersion describes the state in which a player concentrates completely on the game and immerses himself mentally in the game world.

“I always start with rough planning and try to program the game mechanics as quickly as possible”, says Mertens, “I work a lot with placeholders and then I can see if it works at all, whether it’s fun at all. Prototyping at the beginning is a successful concept.”

For example, the Tiny Tap Gems title Hover Disc is about moving your own discs onto target fields on a game board, which then give you points. In an early game mechanics, it worked in such a way that the players could freely choose which of their four discs they would push. “I changed this after a few tests”, says Mertens, “so that you could only move the discs one by one. Trying out another concept is often revealing, in the case of hover discs it brings the player into more interesting situations that are simply more exciting. The only way to find out about it is to experiment.”

Programming games: Just get going, the market doesn’t matter at the beginning

“At the very beginning of a programmer’s career, the market plays no role at all. It’s all about developing your own skills”, says Joachim Mertens. “There’s only the idea, and you try to see if it can technically work. Later on, one can orient oneself to the market.”

Then, at the latest, the subject of taste plays a role. “If five out of ten gaming testers say they don’t like the blue stones, and you turn them red, will the game get better? Maybe the other five testers will find it stupid.” Mertens advises not to worry too much about taste and design, especially at the beginning of a career as a game developer. “Because you can’t please everyone anyway. You can only follow your own line and hope that as many people as possible like it. But one should not become resistant to advice either, just because I personally like green lettering on a red background, for example, this does not mean that it is also easy to read.”

“A lot of people take on too big a task”

Especially at the beginning of a career it is also important to stay tuned and get ready at all, from the first idea to the marketing of the finished project – to get to know all aspects. “Many people are very negative about their own things”, says Mertens, “others don’t have a lot of patience, and that’s what you need for the projects. Better a half good and small but finished project on the market than a great project that never gets finished. A lot of people take on too big a task, especially at the beginning.”